The most cutting edge cigar is about to make its world debut at TPE 2022.

“BRIDGEING THE CULTURES OF SMOKE”

In early 2020, Patrick Potter and Alex Mateo met at the Brown Palace in Denver Co. Both avid cigar enthusiasts they met at one of the most elite cigar dinners in the country, The Congressional Cigar Dinner held every year at Churchill’s located inside the Brown Palace. Senators, Congressmen, Governors from neighboring states attend this invitation only cigar dinner. Patrick’s cigars’ TRIFECTA were on display for the dinner and they were nothing short of perfect for the evening. The Governor of Colorado who isn’t much of a cigar smoker, attends as a matter of duty,  smoked Patrick’s cigar to its end, which many took notice of including Alex.

Patrick and Alex spent the rest of weekend smoking and bonding over what they loved most – cigars. During this weekend Alex explained his background. He’s a scientist who owns most of the patents in the cannabinoid sector. Patrick, having no idea about this grew great curiosity – “what do you mean there are cannabis molecules that don’t get your high?” Alex spent hours explaining the molecular design and use of the 150 cannabinoids found in cannabis that can, and one day likely be a cure for things like inflammation, obesity, anxiety, and maybe even cancer. Patrick’s obvious next question was whether these cannabinoids could be some how infused into cigar tobacco? Alex said he didn’t see why they couldn’t. Being who Patrick is, began researching method. Alex obtained small samples of various powder-based molecules to test. And with a series of failures Patrick figured it out. Patrick and Alex began working quickly to file a patent to protect this innovative methodology and technology.

In 2021 Patrick was approached by another member of the Cannabinoid community to blend him a cigar. Patrick entertained the conversation – and thought maybe a collaboration was possible but this person hadn’t thought out the consequences of what he was proposing. There are several unknowns, such as the burning of oil – is that harmful? Is inhaling that something we need to be concerned about? How do we test that? Product Liability is something Patrick takes seriously. This was a project Patrick and Alex knew was going to need real funding to pursue. Patrick found a 3rd party ISO certified testing company who would take the fermented tobacco containing the cannabinoids Patrick was testing and develop a market test for 150 people. The results were astounding. In this test 50 placebo cigars were given and 50 responses of no effects felt were documented. The other 100 responded with the same astonishing results – all felt an affect some were more profound while others were less – but they all had a neurotropic experience. We were definitely on to something without any side effects that were measurable. With documentation in hand, Patrick with Alex help – began to delineate the final combination of cannabinoids and a particular blend of cigar that paired perfectly. Patrick called it LIMITLESS> LIMITLESS is patent pending. LIMITLESS is a formulation of CBG and CBN. In total 170 Milligrams per cigar. The effects of CBG are similar to hyperactivity psychotropic drugs like Adderall or Ritalin, but without any pharma or amphetamine like feeling. You feel pure focus, concentration and clarity. Whereas CBN is similar to a benzodiazepine like Xanax or Valium, the reduction of Anxiety on a body level without feeling slow, drugged or euphoric.  When these two cannabinoids are met with the formulation we have created, your personal possibilities are LIMITLESS 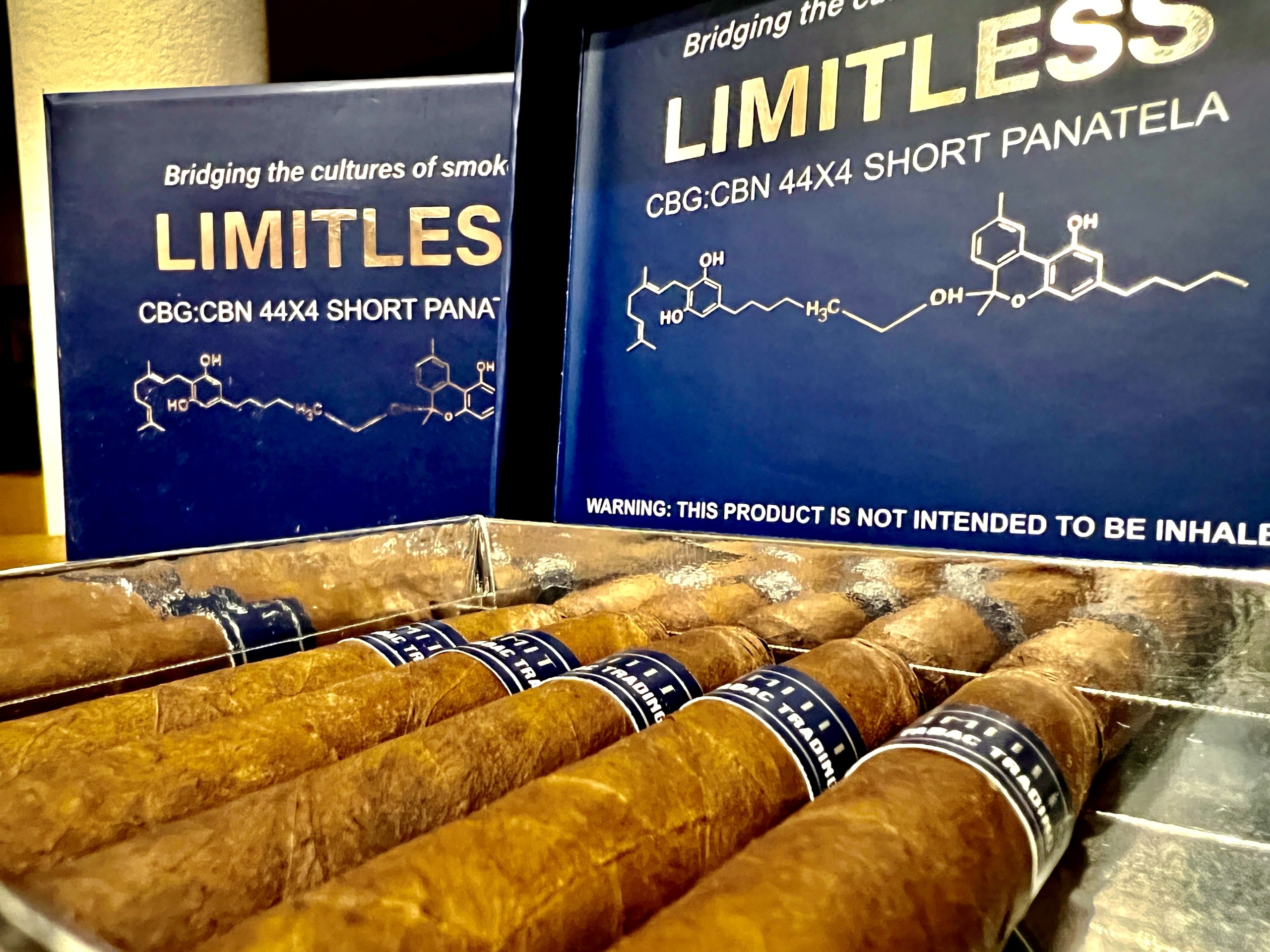 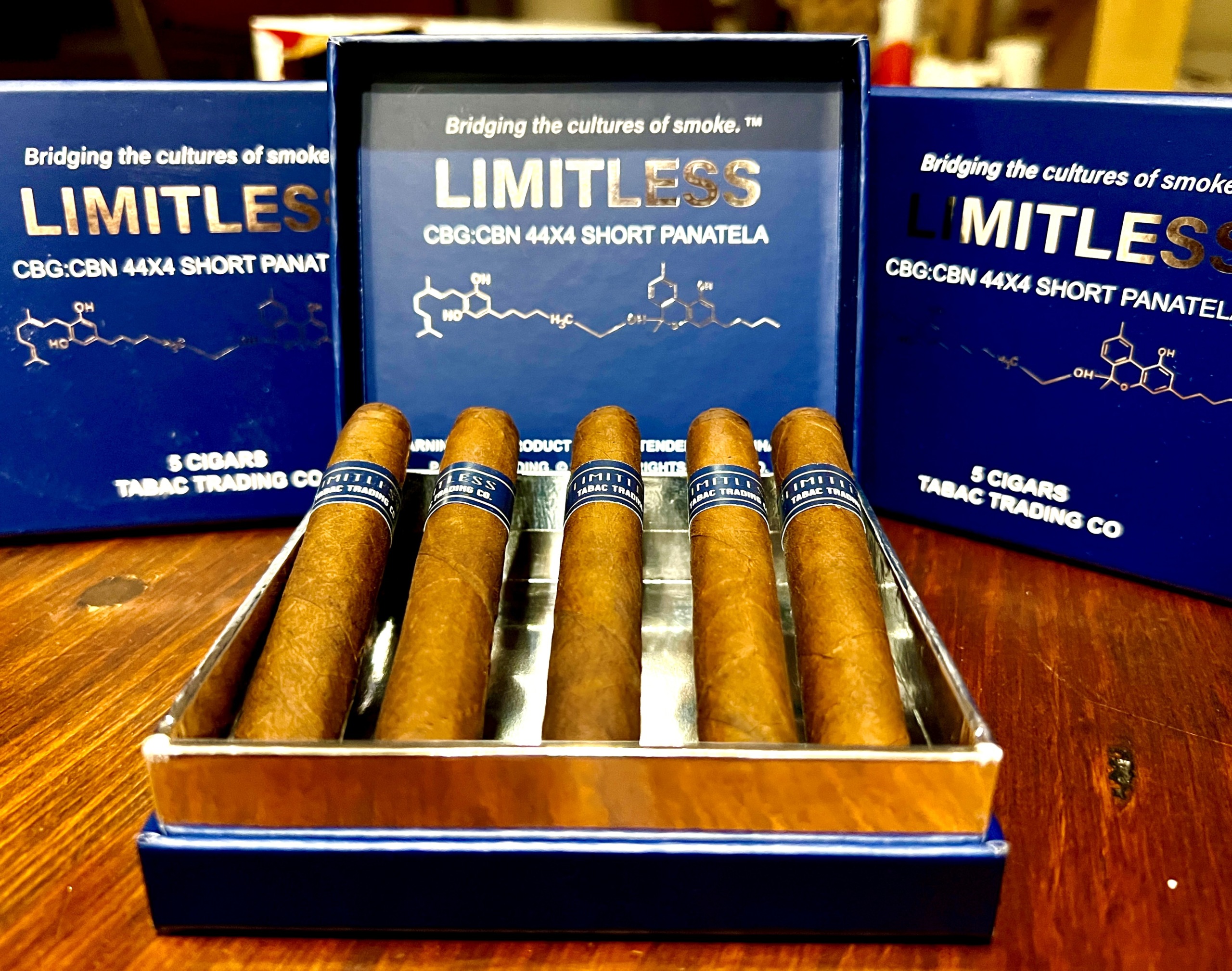 In May of 2021, Patrick set off to find investors for this project. He had to be careful; he couldn’t talk about it too much. Although a project of this magnitude needed support. David Keith came on board to assist as a liaison to the culture of smoke. Two worlds perversely complementary in their asymmetry. Tobacco and Cannabis.  Then Todd Vance came on because he’s the best candidate for cigar sales nationally, really no one is better. We have the beginnings of a formidable team. With only months away from completion Patrick was able to secure the balance of funding needed to complete the project and has begun get ready for TPE.

Patrick is a seasoned CEO with several successful concerns in his review mirror. He decided to form Unlimited Tobacco LLC out of Florida as the primary distributor for Limitless Cigars, Fronto Leaf, Gabba Leaf, Pipe Tobacco and Bale Tobacco Products that are treated with a variety of cannabinoids for use in both cigar making but also in the smoke shop sector. Licensing of the tobacco but the technology is being offered for qualified cigar makers.

LIMITLESS will be sharing the TABAC Trading Co booth at TPE Booth #3084.

About the Author: TPE